Seven years ago, Domino’s Pizza was in the pits. Tasteless, unexciting food and an all-time low in its share price, the company also ranked last in a 2009 survey of consumer taste preferences. The only silver lining: they scored top marks for delivery and value. 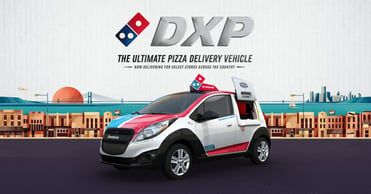 Just a few short years later, Domino’s has recaptured the hearts of its customers, and its investors. Now the second-largest pizza chain in the world, its share price has soared from its bottom-of-the-barrel price of $8 in 2009 to more than $160 a share in December, 2016.

Today, the company considers itself a tech firm as much as a pizza maker, with digital futurists making up half the workforce in its Ann Arbor headquarters.

Talk about value creation. What happened?

A focus on customers is what happened - as well as the recognition that digital technology in its many forms is a key driver of virtually all customer experiences today. Their new CEO, J. Patrick Doyle, executed against his vision by embracing customer experience as a core strategy, and enabling the delivery of that experience by becoming a disruptive technology company.

After all, Domino’s was more than a company that just made pizzas; it delivered them, too. With this insight, the company recognized that IT — along with CX — was the key to turning things around.

There are a bunch of lessons we can learn from this turnaround. If you embrace these four, you might be on track to creating a digital disruption success story of your own….

Lesson 1: They listened to their customers (and rewarded them, too)

Shortly after coming on board, Mr. Doyle told the Washington Post that Domino’s was committed to doing better after listening to customer complaints about the taste of their pizza. To prove its commitment, it launched a legendary ad campaign the Post described as possibly “the most elaborate mea culpa ad in history.”

The ad showed actual emails and negative tweets about Domino’s, as well as footage from focus groups in which one participant wonders, “Where’s the love? It doesn’t feel like there’s much love in Domino’s Pizza.”

Domino’s HQ employees also read the scathing criticism aloud. With comments such as “a crust like cardboard,” and “totally void of flavor” printed on sheets of paper, the wounded pride of company chefs and other workers was evident.

Doyle and his team faced the brutal truth. “You can either use negative comments to get you down or you can use them to excite you and energize your process to make a better pizza,” said Doyle in the ad. “We chose the latter.”

By facing consumer criticism head-on and using it to better understand the needs of its customers, the results— a new pizza recipe and revamped menu, for starters — helped change attitudes toward their brand.

Domino’s hasn’t stopped nurturing customer relationships. This month, the company announced an initiative to give loyal fans an opportunity to win Domino’s stock. And rewards members can try out for a $10,000 prize through posting photos on social media. And more.

Lesson 2: They embraced the power of social influence

In “Smart Customers, Stupid Companies,” the book I co-authored with Bruce Kasanoff, we defined Social Influence as the impact that social networks have on the dynamic between customer and company. It means that the opinions and experiences of countless other people get thrown into the mix, radically changing the customer relationship lifecycle.

In the past, when a company engaged with a customer, few other parties would be involved. Today, that’s no longer the case. Social networks create an environment in which customers are talking to other people, asking questions, and learning from their digital peers. At the same time, customers are interacting with the company.

Social Influence shifts the balance of power. For example, some people won’t order from a website unless it includes feedback or customer reviews. The feedback must be credible—meaning it honestly includes the “mehs” and the “blechs” along with the happy “yays.”

Domino’s did just that.

As it encouraged consumers to try the new recipe and leave feedback on social media, the company showcased the comments with a live Twitter feed on its Pizza Turnaround microsite. The company also displayed comments on related blog posts that covered the campaign, including one podcast interview with Doyle on Oprah Radio.

Harnessing the power of Social Influence, Domino’s even reached out publicly to food bloggers who had previously criticized their pizza’s taste, asking them to give the new recipe a try.

Domino’s embraced the power of social influence to channel the conversation. Through its website and uncensored comments, they reflected the ways its company was touching individual consumers – bringing all audiences together into the mix with no spin, and no hidden agenda. Which brings us to…

In all aspects of the turnaround, Domino’s Pizza got it right because they recognized the value of transparency. It didn’t hide from dissatisfied customers, but brought them and their people into the process at numerous stages.

Here are some examples:

There are more examples, of course. But the point is, in the world we compete in today, there is little tolerance for anything but the truth. And if customers can’t get it from you, they’ll get it from each other. And they’ll use it to reframe your brand, whether you like it or not.

On the other hand, companies that are honestly transparent have a much easier time building loyal customers. We know this is hard for most companies. But, it’s something to think about…

Lesson 4: They improved existing – and designed new – experiences, based on their customer’s needs.

In its early years, Domino’s built its reputation with a timely delivery service. Transportation (getting pizza from point A to point B) has always been a part of the business. But despite its top ranking in this area, they needed something more to align with the ‘new’ Domino’s.

One way they got there was by embracing design thinking – a mindset oriented toward solutions, actions, and the creation of a preferred future by putting your customers and their needs at the center of the experience (and product and service) design process. For Domino’s, this meant disrupting the pizza delivery business with a complete overhaul of the way its product arrives at customers’ doors. The Pizza Tracker App is part of this. But once that pie leaves the store, what you’re tracking is known as the DXP (Delivery eXPert), a modified Chevy Spark that Doyle described as a “purpose-built pizza delivery vehicle.”

Four years in the making, the car includes a warming oven, a level floor, and a console that holds salad, sides, and sodas. The car has just one seat and has room for 80 pizzas. A cool, functional, advertisement on wheels, Adweek heralded it as “a cheese lover’s Batmobile.” There are now more than 100 DXPs in cities such as Boston, Detroit, New Orleans, and Seattle.

The company remains the leader in pizza delivery today, and is poised to be the pizza delivery leader of the future. A partnership with Ford Motors lets customers order pizza from the control panel of a car. And they’re experimenting with other hi-tech platforms such as robot and drone delivery.

Soon, pepperoni may be raining from the sky.

The lessons from Domino’s success story can help your company in many ways. They can turn a company around, accelerate growth for leaders, and fuel the explosive growth of a startup.

Chances are, your competition is already taking action using some of these examples. Certainly, leaders in every market are embracing customer experience management, and most are looking to digital innovation as the way to deliver it – just as Dominos has done. Enjoy!

Understanding Your Customers Is the First Step to Delivering Better CX

Is Apple Losing Its Luster? Microsoft CX Comes from Behind to Delight