Customer experience pioneer and retail giant, Nordstrom, recently found itself in hot water over customer privacy. They’d been operating a pilot program in the Dallas-Fort Worth area for a special technology that tracks shopper’s in-store foot traffic via cell phone signals.

The appeal is obvious, and significant; Nordstorm isn’t alone in this test. But in an ever-more transparent world, the risks can be significant as well. Once you know the facts, any outcry over this issue seems overblown. But it still offers a few lessons for others who may want to experiment.

The technology that Nordstrom was piloting is from a firm called Euclid Analytics. Think of it as a Google Analytics for physical retail locations; now that almost all cell phones have wi-fi, the periodic pulses of data used to find available wireless networks can act as a sort of beacon. 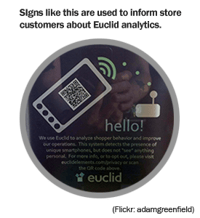 Euclid uses these pulses to reconstruct shopper locations and foot traffic patterns; when someone moves closer to one access point and farther from others, the change in signal strength can be used to approximate the device’s location.

To be clear, retailers can’t personally identify any individual (and attempts to do so violate Euclid’s terms of service). But some critics bristle at the idea anyway, and when it comes to customer experience perception IS reality.

There’s a major disconnect between marketers and consumers on this issue. On one hand, you have Nordstrom’s spokesperson stating, “This is literally measuring a signal. You are not connected to the signal.” But many consumers feel incredibly creeped out by this kind of data collection. One said, “Now that I know they're tracking me, I'm a little less likely to shop in their store.”

The irony of this situation is that Euclid Analytics provides significantly more consumer privacy protection than ubiquitous technologies ranging from in-store cameras and data mining over purchase histories, to “liking” a brand on Facebook.

But none of that matters unless you properly communicate to your customers, and that’s where this pilot project started to come off the rails.

Three Lessons Learned: What Nordstrom Did Right (and Wrong)

Thinkers throughout history - from Spiderman to Voltaire - have taught us: “With great power comes great responsibility.” And while Big Data gives companies of all kinds the power to serve customers better than ever, most simply use it to serve themselves – almost guaranteeing a backlash at some point.

When it comes to leveraging the disruptive force of Pervasive Memory and the power of Big Data to further your agenda, here are three take-aways that can help you balance privacy and customer experience, and hopefully avoid a Big Data bite.

Nordstrom has a long track record of delivering great customer experience, and they’re a model company for many others. What happened wasn’t in any way a failing of their customers or a betrayal of values, and other from a vocal minority I don't think it was viewed as such by their legions of loyal customers.

The fact is, figuring out how to leverage the benefits and balance the risks of disruptive, digitally-driven innovation is still new territory that’s being explored. And when a recognized customer-experience leader such as Nordstrom comes this close to getting bit, it’s important for everyone to recognize that even well-meaning pioneers need to watch their step.

Customer-Centric Companies, Rejoice! The Era Of Big Data Is Upon Us

Customer Experience and Big Data (5 Ways to Leverage Your Information)